What problem do Factorization Machines solve?

TL;DR: FMs are a combination of linear regression and matrix factorization that models sparse feature interactions but in linear time.

In the formula above, the run time is O(n)

where n is the number of features. When we consider quadratic feature interactions, the complexity increases to O(n^2), in the formula below.

Now consider a very sparse set of features, the runtime blows up. In most cases, we instead model a very limited set of feature interactions to manage the complexity.

How do Factorization Machines solve the problem?

In the recommendation problem space, we have historically dealt with the sparsity problem with a well documented technique called (non-negative) matrix factorization.

The intuition is that each feature will learn a dense encoding, with the property that high positive correlation between two features have a high dot product value and vise versa.

Of course, the latent vectors can only encode so much. There is an expected hit on accuracy compared to using conventional quadratic interactions. The benefit is that this model will run in linear time.

For the full proof, see lemma 3.1 in Rendle’s paper. 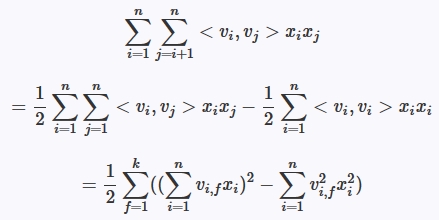 can be precomputed, the complexity is reduced to O(KN).

The following installation steps worked for me on Ubuntu 16.04.

The below options worked for me:

If not, install java

Run pyspark (this is available in /usr/lib/spark/bin/) and test out.

That’s it! You are ready to rock on using Apache Spark!

Installing and setting up Python and IPython

For simplicity I downloaded and installed Anaconda with the python 2.7 version from Continuum Analytics (free) using the built-in install wizard. Once installed you need to do the same thing you did with Java.  Name the variable as PYTHONPATH, where my paths were C:\User\cconnell\Anaconda2. You will also need to add %PYTHONPATH% to the Path variable

I am using 1.6.0 (I like to go back at least one version) from Apache Spark here. Once unzipped do the same thing as before setting Spark_Home variable to where your spark folder is and then add %Spark_Home%\bin to the path variable.

Download and unzip the Hadoop common binaries and set a HADOOP_HOME variable to that location.

Getting everything to work together

Now to launch your PySpark notebook just type pyspark from the console and it will automatically launch in your browser.